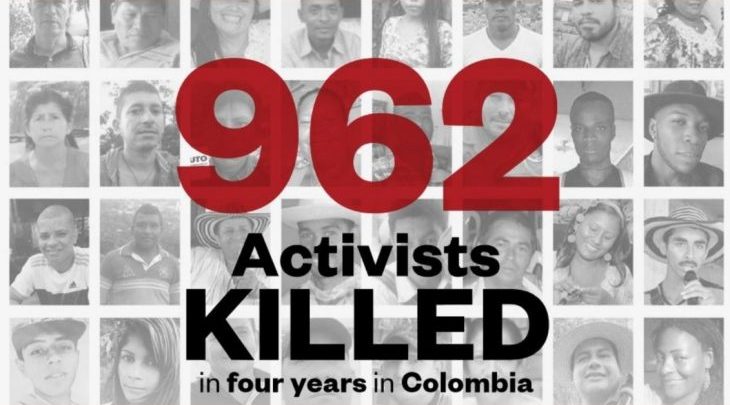 A new publication from JFC and UNISON has documented the scale of the violence against community activists in Colombia.

Between 2017 and 2020, 962 community activists were killed, including trade union, peasant, African-Colombian, indigenous, women’s rights, LGBTQ, environmental activists and many more.

In the publication we remember the names of those that have lost their lives. And in tribute to them we also give recognition to the important work of activists who continue to stand up in spite of the dangers and threats. We celebrate the work of Olga Quintero, a peasant leader in the northeastern region of Catatumbo, and of Darnelly Rodriguez, a human rights activist in the Valle del Cauca region, including in the city of Cali where she has suffered attacks from the police.

The vast majority of the killings take place in regions historically abandoned by the Colombian state, in spite of demands from local communities for greater investment and collaboration with their own development plans.

The failure to suitably implement the peace agreement has been another major problem in addressing the crisis. The agreement specifically stipulates for a public policy to be implemented to target paramilitary successor groups but this has not happened. Meanwhile the Colombian government points to the cocaine trade as a major fuel for the violence, yet the chapter in the peace agreement focused on reducing the cultivation of coca crops has been minimally advanced.

Urgent action is required to protect all those in Colombia who are raising their voice for peace and social justice.