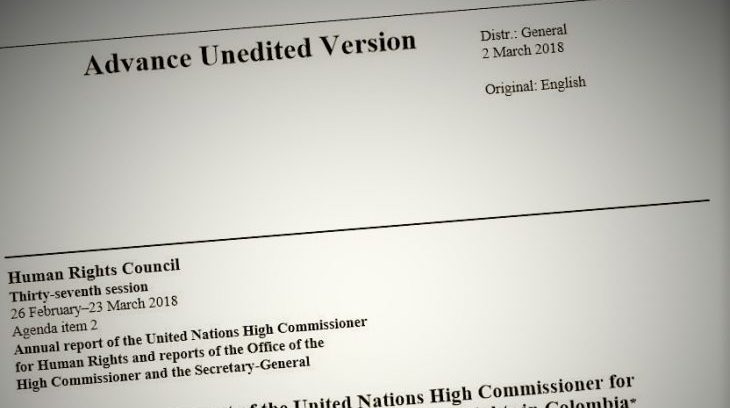 Click here for the Annual Report of the United Nations High Commissioner for Human Rights on the situation of human rights in Colombia.

Note by the Secretariat

The present report describes the human rights situation in Colombia in relation to peace, security, development and democracy in 2017. It also highlights some activities of the Office of the United Nations High Commissioner for Human Rights (OHCHR) in the country. In particular, the report presents the assessment by OHCHR of the first year of implementation of the human rights aspects of the peace agreement. It stresses the specific challenges in rural areas, including insecurity, violence linked to illicit economic activities in the context of disputes between illegal armed groups and organized crime, particularly in the areas of former Revolutionary Armed Forces of Colombia – People’s Army influence. The report also highlights the increasing attacks on human rights defenders, the impact of corruption on disparities in the enjoyment of economic, social and cultural rights, and the difficulties of addressing multi-dimensional, decades old problems suffered by the rural communities. The report includes 19 recommendations.

1. This Report is based on the monitoring of the human rights situation in Colombia by the Office of the United Nations High Commissioner for Human Rights (OHCHR) between 1 January and 31 December 2017.