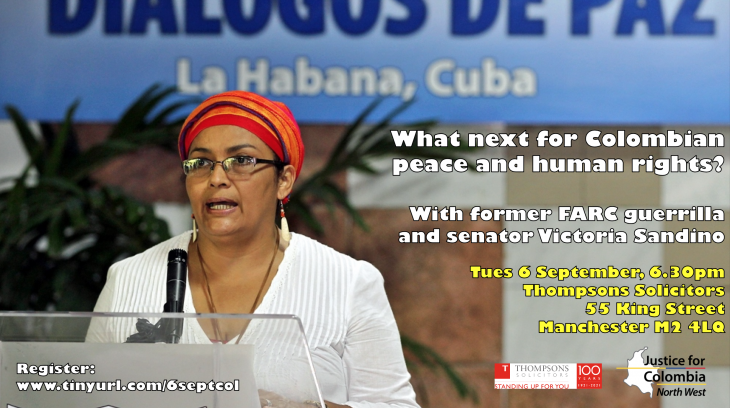 Justice for Colombia North West and Thompsons Solicitors invite you to a special meeting in Manchester with Victoria Sandino, a former FARC guerrilla commander, peace negotiator and senator in the Colombian congress.

What next for Colombian peace and human rights?
With Victoria Sandino

After years as a guerrilla commander in the Revolutionary Armed Forces of Colombia (FARC), Victoria Sandino was an architect of the 2016 peace agreement between the FARC and the Colombian government. The FARC reformed as a political party and she became a senator before stepping down this year.

Colombia recently elected Gustavo Petro, the first left-wing president in its history. But the country faces extreme inequality and ongoing violence that has killed over 1,000 social activists and 335 former FARC guerrillas.

Join Victoria Sandino and other speakers for this important international solidarity event.