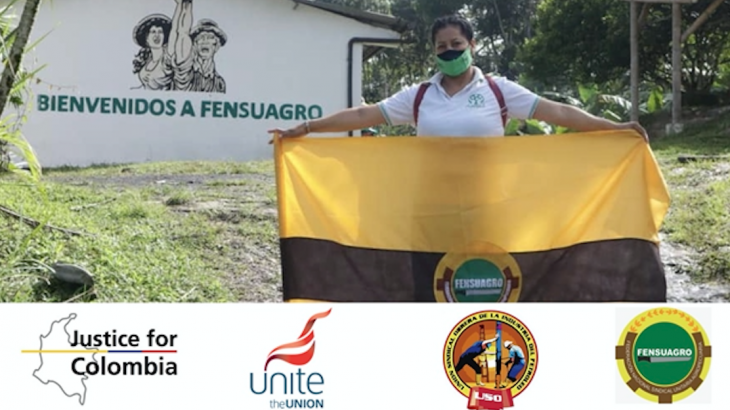 Justice for Colombia invites all Unite members to our fringe event at next week’s Unite Policy Conference in Liverpool.

This fringe event is for Unite delegates and others attending the conference.

Despite the optimism generated by the 2016 peace agreement, Colombia remains the world’s deadliest country for trade unionists, with 22 murdered last year alone, as well as human rights defenders and environmental activists.

Meanwhile, the country has recently seen huge mobilisations in support of economic justice, human rights and peace – with trade unions at the forefront. In response, the right-wing government of Iván Duque has brutally attempted to crush the protests, with security forces killing at least 44 people and committing widespread sexual assaults, torture and forced disappearances. But the Colombian people refuse to back down in their demands for a fairer society.

We are joined by the presidents of Unite’s two sister unions in Colombia, the FENSUAGRO agricultural union and the USO oil workers union. We’ll also hear from Unite members who have campaigned in support of human rights and peace in Colombia.